When Gary Johnson took his oath of service in 1996, he couldn’t have anticipated the impact his service would have on students and clients at Meridian Technology Center.

Over the course of his 25 years of service, Johnson and his fellow board members have met monthly to make decisions regarding the school’s services and course offerings, shaping the future of the career training facility. The result of their efforts can be found in the district’s skilled workforce that supports the communities the school serves.

When Johnson joined the Board, Meridian offered approximately 13 career training programs for high school students and adults. Now, district residents can enroll in 20 plus training programs while specializing in nearly 60 career majors, choose from more than 100 personal and professional development courses each semester, enroll in customized workforce training and grow their new business at Meridian’s Stillwater campus.

In addition to playing an instrumental role in the development of school policies and serving as a decision maker on educational issues, as a board member Johnson has helped pioneer expansions of the school’s facilities, including the construction of the Meridian Technology Center for Business Development in 1998 and its expansion in 2007; building the school’s west wing in 2005 to house health career training programs; the construction of the Clinical Simulation wing in 2009; the addition of the Building Trades building in 2013 and the STEM Academy in 2020. In 2017, the Board purchased nearly 20 acres of land in Guthrie for the school’s South Division campus that is expected to open in January 2022.

In looking back at his service, Johnson said the thing he’s most proud of is the school’s leadership and its commitment to investing in its human resources.

“Meridian has only had three Superintendents, and each one of them understood the importance of developing people,” he noted. “I think that’s what has helped the organization grow the most and make the impact it’s had on the district.”

As proud of the school’s past as Johnson is, he’s also excited about what’s ahead.

“It’s an exciting time for the school, the district and Oklahoma,” he said. “We’re moving forward with more classes, more programs and more opportunities.”

Johnson’s commitment to career and technology training began long before he joined the Board. His first connection to Meridian was when he enrolled in a Masonry course as a young adult. Years later, when he worked for the Stillwater Flight Center, he saw an opportunity for Meridian to make its mark in the air he approached founding Superintendent/CEO Dr. Fred A. Shultz about adding a private pilot course to the school’s short course offerings. Details quickly fell into place, and not long after their meeting, Johnson began teaching the instrument rating classes.

That was just the beginning of the Johnson family’s ties to Tech. His wife Emalee and daughter Jennifer are graduates of the full-time Business Technology program. His other daughter Denise completed the Cosmetology program, and his son Chris is a graduate of the Radiologic Technology program. Grandson Garrett also attended Tech while he was in high school, and Gavin, his other grandson, is a current student in Digital Media.

Understanding the impact career training can have on students is one reason Johnson continues to volunteer his time on the Board.

“I know the influence Meridian has had on my family,” he said. “Over the years, as a member of the board, I have gained a greater understanding of the role Meridian plays in developing a workforce for the communities we serve, as well as the impact CareerTech has on businesses across the state.”

The Meridian district is divided into five geographic areas. Meridian’s board members live in and represent their district for a five-year term. Members are advocates for education, and they are tasked with ensuring Meridian continues to fulfill its mission to educate, enrich lives and secure economic futures for district residents. Current board members include Johnson, Sherri Huneycutt, Lorrie Janzen, Dr. Joe Williams and Randy Kellogg.

To put board members’ tasks in perspective, they are responsible for decisions that influence students in Meridian’s full-time career training programs, individuals who enroll in personal and professional development short courses and business-related training, and more than 100 staff members and 30 adjunct instructors.

The Board also oversees Meridian’s Workforce and Economic Development division that includes customized training in computers, entrepreneurship, health care, industrial, leadership and staff development, and safety. This division partners with new and existing companies throughout the district to provide training. 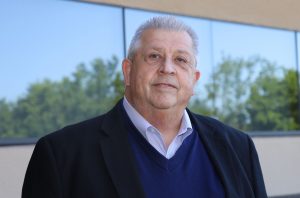