When Beth Ritchie graduated from the Practical Nursing program at Meridian Technology Center in February 2021, she knew she would use her skills to make a difference in the lives of her patients.

Unlike most of her classmates, though, the Perry native anticipated that most of her caregiving wouldn’t take place in local medical facilities – it would take place more than 8,000 miles from home in Kabale, Uganda.

Since 2016, Beth has been a volunteer with the Two Roads Foundation, a nonprofit organization supporting orphans in the African province of Kabale. Two Roads is led by Perry residents Donna and Greg Stone. Following the couple’s more than 20-year commitment to ministry, in 2012, they left their careers and began mission work full-time. In 2015, they established Two Roads.

Beth went on her first mission trip with the organization when she was just 15. Since then, she’s taken about two trips a year, with her last visit wrapping up just last month.

While Beth now uses her medical training as part of her mission work, a commitment to service has always been a part of her life. She and her family are active in their church, and through the years they have dedicated both time and money to help those in need.

Two Roads primarily serves impoverished children in Kabale, located in the southwest part of Uganda. Population-wise, Kabale is about the size of Stillwater. When Two Roads first opened, nearly 13 million people in Uganda lived below $1.90 a day, and an additional 23 million lived below $3.10 a day.

While the government provides free education, families still need to pay for school fees and uniforms. Fees average $450 per year and many families cannot afford to send their children to school. Two Roads relies on donations and sponsorships to provide for children in the community. Funds are used to purchase school uniforms, pay school fees and provide meals on weekends when the children are not in school.

Two Roads has four full-time staff members who live in Kabale; however, the organization relies heavily on volunteers like Beth. The foundation is located in an area known as “the Junction.” Here, locals gather to hear about the gospel and learn valuable life skills. This is where Beth can use her health care training to educate residents.

“The area has a problem with a particular head fungus and ringworm,” Beth said. “It may not sound like much, but something as simple as learning how to wash your hands properly can have a significant impact in a community like Kabale.”

Beth typically teaches courses covering basic hygiene, the importance of covering your nose and mouth when you cough and boiling water to prevent Typhoid infections. On this trip, she also held private courses for teens and young adults that focused on women’s health issues and development.

“They have so many questions and misconceptions. They grow up learning old wives’ tales and take that for the truth,” she explained. “It’s a remote area, so it’s not like they can Google something and find out what to do.”

The 20-year-old hasn’t been shielded from the harsher truths of life in the impoverished nation. Health care isn’t readily available to most residents. Because of that, procedures that are considered routine in the United States bring challenges there. Beth recalled working closely with one patient who lived at the Junction. He suffered from what staff had assumed was tonsillitis. In little time, his body became completely swollen. Beth was able to identify that he had renal failure.

“I was really able to do that because of the training that I had at Meridian,” she said. “With this situation, I actually sent a message to my former instructor Mrs. Updike to ask her questions.”

Beth describes the hospitals as clean, but not up to American standards. Supplies are in short order, and privacy doesn’t exist.

“Patients are seen in open rooms. The labor and delivery room had rows of beds filled with women lined up to give birth. When the hospital lost running water, they took buckets to gather rainwater. It’s impossible to imagine a hospital operating like that here,” she said.

When asked about the toll of seeing such devastation, Beth said she doesn’t focus on that. Instead, she chooses to see what’s possible.

“I’ve grown up with a sense of hope,” she said. “That’s what Two Roads is committed to as well. They help people who have great needs. They give them hope.”

Two Roads currently operates out of a house in Kabale. The organization is broadening its impact in the area with plans to build a facility. Information about these projects and other initiatives of Two Roads can be found at only2roads.org. 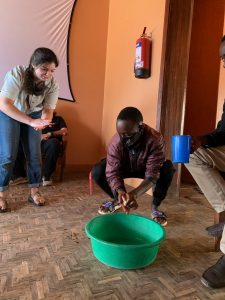 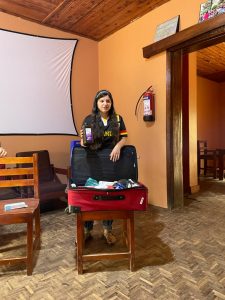