Company owners Tim Webb and Taylor Disel have had a few false starts, but they recently released the first shipment of their above-water fishing lure retrievers.

Disel, a longtime fisherman, had the idea for RocketSlug after losing one too many lures in the brush surrounding his favorite fishing spot. Fed up, he knew there had to be an easier way to reel everything back in. He couldn’t find a product on the market to solve his problem, so he did what most entrepreneurs do – he decided to design something himself.

“Everything that I saw online worked below the water,” he explained. “I knew there had to be a better solution.”

As a high school student, Disel enrolled in the Precision Metal Fabrication program at Meridian Technology Center. In that program, the Stillwater student learned the basics of designing and laying out patterns, interpreting blueprints and following engineering specifications to complete projects. He took that knowledge and started working on his prototype.

When his design didn’t work, Disel didn’t give up – instead; he reached out. He contacted Russel Frick, the Computer Aided Drafting instructor at Tech. As a student at Tech, Disel got to know Frick and his students through projects that the two programs collaborated on. He felt confident that if Frick couldn’t help him, he would know someone who could. Taylor brought his first prototype, and together, they talked through design issues and explored resources. This eventually included a conversation with members of the Business and Entrepreneurial Services team at Meridian.

That’s when Disel met Tim Webb, an entrepreneur whose 3D modeling company, Equivaq Software, was already located in Meridian’s business incubator. Webb, also a product of Oklahoma’s CareerTech system, attended Tulsa Tech as an adult student taking a two-year evening course in drafting and design. He credits his time at Tulsa Tech for helping him develop the skills he would need to have a successful career as a product designer, an engineer and an entrepreneur.

“My training began at Tulsa Tech, and it’s also where I developed my passion for helping small businesses get products to market,” Webb noted.

Now as a majority owner in RocketSlug and mentor to Disel, Webb’s CareerTech story has come full circle.

For nearly two years, Disel and Webb worked on new designs. The duo eventually finalized their product – the result is a bright yellow vessel that can be snapped on any fishing line, launched at a lure that’s caught in debris or trees, and then reeled back in. To help finance the production, they set up an online fundraising account. While fishing fanatics were quick to place pre-orders, it didn’t take long for Disel and Webb to realize they would need additional capital investors to make their dream a reality. They began the search, securing funding through an anonymous investor. With money in hand, they moved into production early this year.

Then, in June, they hit a snag.

Their first round of production was flawed. The company offered to redo the order, but they knew if they stayed with that company, any reorders wouldn’t be available until late fall. That wasn’t a risk Disel and Webb were willing to take.

While they weren’t back to ground zero, Webb admits it was a significant setback.

“This isn’t the first time that I’ve worked on projects that had significant production issues, but that was when I was working for someone else. This time it was on my dime,” Webb said.

Locating a new producer in the middle of a global pandemic was less than ideal, especially since the partners were committed to manufacturing the product in the United States. Their persistence and patience paid off, though. They secured production with Imperial Molding out of Newkirk, Oklahoma, and just last week, Disel and Webb mailed all of their pre-orders. They are now taking new orders and getting geared up for the holiday season.

“We focused on a first down rather than the touchdown to get to the next goal. Something entrepreneurs often do,” Webb added.

While the production mishaps led to them missing the spring and summer peak fishing season, looking ahead, Webb and Disel are optimistic about the company’s potential.

“This year has been a year of learning, that’s for sure,” Webb said, reflecting on the production obstacles he and Disel had to overcome. “From here, we will be able to look back at everything and make decisions based on data.”

The company will continue to take orders online, but they are also exploring retail options as well as partnerships with other fishing-related e-commerce sites. To learn more about RocketSlug, visit rocketslug.me.

A Place to Launch a New Business

As a crucial part of the district’s entrepreneurial ecosystem, the Business and Entrepreneurial Services team operates Meridian’s Center for Business Development, a business incubator with built-in support services that allow entrepreneurs to focus their efforts on growing their business by providing a full suite of amenities and consultation. The Center provides office and manufacturing space for early-stage startups to help them accelerate through the most challenging phase of building a company. It is one of 29 certified business incubators in the state. 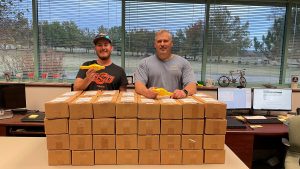